Music In The Afternoon – September 2013

ChristChurch was once again the place to be if you wanted to hear quality music performed by talented young people. This was the sixth concert in a series which has brought young singers and instrumentalists to perform both serious and popular music. 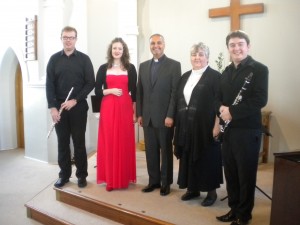 On this occasion, the programme featured, as its main performer, Louisa Stirland – a young soprano fast making a name for herself both here in Lancashire and further a field. In October 2012, Louise won the prestigious title of ‘BBC Young Chorister of the Year’, since which she has featured in concerts and events in different parts of the country as well as in numerous broadcasts. Louisa is a student at Runshaw College and a chorister at Blackburn Cathedral.

Louisa presented an ambitious and varied programme of vocal music. Solos by Bach and Handel and songs from the ‘romantic’ period of Schubert, Franck and Faure were performed with fine attention to detail and with good stage presence. Intonation was secure throughout and there were some lovely high notes. Songs from ‘West Side Story’ and ‘My Fair Lady’ took her out of her serious zone and perhaps called for a more relaxed approach. This is a young voice and we watch and listen with interest as it matures over the next few years.

Also featured in the concert were two young instrumentalists – well known to the congregation and audience at ChristChurch. Daniel Dwyer on flute and Jason McMahon on clarinet combined in works by Corelli and Kumar with excellent musicianship and style. They also contributed sympathetically in their accompanying of some of Louisa’s songs.

Carol Rose is perhaps best known as a piano-accompanist; a role not always appreciated by the listener as we concentrate on the solo performer, but it was both refreshing and enlightening to hear Carol as the solo performer on this occasion. Her playing of movements from Schumann’s ‘Kinderscenen’ were delightful – capturing the simplicity of childhood. She also played a new composition for piano by Jason called ‘Child’s Play’ (it was anything but!) which created interest and curiosity from the appreciative audience.

Carol has again produced a concert which has given a platform to young musicians and in so doing provided a wonderful afternoon of musical delight.

Proceeds in aid of the ‘Methodist Fund for Mission’ and ‘URC Commitment for Life’ amounted to £630.