The fifth event in the “Music in the Afternoon” series of concerts at Christ Church, Longridge took place on May 12th. 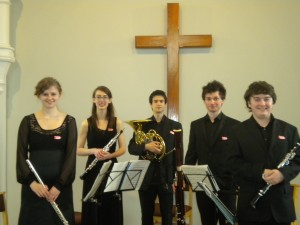 On this occasion it was in the form of a recital by “Volante” a wind quintet made up of students from the University of Manchester and the Royal Northern College of Music.

The ensemble was:- Tessa Watson: flute, Amy Roberts: oboe, Jason McMahon: clarinet, Ed Spencer: horn and Sam Gee on bassoon. Jason is no stranger to the people at ChristChurch having performed on a number of occasions.

In every respect the performance could only be described as professional. The ensemble was superbly balanced musically, their introductions were slick and informative and their presence on stage immaculate.

They performed a mixture of old and contemporary repertoire for wind quintet, demanding instrumental skills of the highest order. Although I suspect that many in the audience were hearing this repertoire for the first time, there was much to admire in the skills of the players. Highlights for me included an oboe solo by Benjamin Britten, which showed up the versatility of the instrument and indeed the player. The sea shanties of Malcolm Arnold were full of humour and fun.

This memorable concert was arranged by Carol Rose, who spoke about the work of Christian Aid, to which the proceeds of £506 were being directed. During the concert, a short film was shown highlighting how some of the funds raised are used.

During this years Christian Aid week, the people of ChristChurch have been constantly active in supporting this worthy cause. A quiz organised by John Spencer raised £100 and a Longridge Market Coffee Day raised a further £371.

You can get information about what’s going on at Christ Church via Email. If you would like to receive various articles as they are published use the ‘E-mail Subscription’ link at the bottom of the Read more…